Filipina Nannies
New York, Los Angeles, USA, Montreal, Vancouver, Calgary,Toronto, Ottawa, Canada, Saudi Arabia, Bahrain, Dubai, Kuwait, Libya, Qatar, Morocco, Malaysia, Singapore, Hong Kong, Taiwan, England, Europe
I am a WITNESS… to the SUFFERING of my PEOPLE… I am a CHRONICLER of TRUTH… and a CATALYST of CHANGE… TO SPEAK UP… requires not only gumption…but education... Our missions are to INFORM, EDUCATE, ADVOCATE, CONNECT, ACCOMPANY, EMPOWER all Filipinas… KNOWLEDGE is POWER - it's important you SEE FACTS --- KNOW YOUR RIGHTS... CLICK-READ-EACH CITY/COUNTRY – to EDUCATE and EMPOWER YOU....YOU must BE AWARE of abuses and sufferings BEFORE you leave the Philippines... If you are already overseas and being abused, contact the organizations where you are - to help you. These organizations are listed or featured in this blog… Jose Rizal said: The TYRANNY of some - is POSSIBLE ONLY - THROUGH the COWARDICE of others...meaning…Your BOSS is a TYRANT because...YOU ARE a COWARD!?? Do not be AFRAID! TELL TO THE FACE OF YOUR BOSS - Without me, you cannot go to work and you cannot make money…Without me… your house is dirty and no one cares for your children...I WORK EXTRA HOURS - PAY ME EXTRA MONEY... BE BRAVE to SPEAK UP and STOP your ABUSIVE BOSS… DO NOT WORK as SLAVES IN A RICH COUNTRY... CLAIM YOUR LAWFUL RIGHTS AND DIGNITY... We are one, after all, you and I… Together we suffer…Together we co-exist

Poor Philippines!  It is time for the Filipino people to unite - against the USA that treat the country as slavery - with "legal treatise", read how they do it here http://filipina-nannies-caregivers.blogspot.ca/2013/05/philippinesustroops-out-now-true.html

And now it's China who's invading part-by-part and stealing our natural resources (without legal treatise).

It'S time for the Filipinos and Filipinas to have ONE MIND -- UNITED WE ARE STRONG.

The enemy's strategy is always to "Divide and conquer".  So if the Filipinos are divided, then the enemy can conquer them very easily.

The two superpowers United States and China are world bullies and we should not allow a bully to replace another bully,” http://www.inquirer.net/west-philippine-sea/articles?nav=78831&chan=9

We at Migrante Austria join the overwhelming majority of migrant Filipinos resisting the encroachment of Chinese government in Philippine territory.

This encroachment is manifested in the following:

“With 90% of Spratly Islands is within the 200 NME Economic Zones claimed by China; Philippines so daring to used paper to blind the dragon”http://betterphils.blogspot.co.at/2013/07/with-90-of-spratly-islands-is-within.html

We agree with the statement of Bayan Muna Rep Neri Colmenares protesting the ongoing military exercises (war games) between the United States and the Philippines as it only serves to “heighten tension” in the West Philippine Sea. The Philippine government should strongly assert our territory against China. The two superpowers United States and China are world bullies and we should not allow a bully to replace another bully,” http://www.inquirer.net/west-philippine-sea/articles?nav=78831&chan=9
Moreover, it is illusory for us to expect the US to come to our aid should we find ourselves in armed conflict with China: “US Ambassador to the Philippines Harry Thomas reiterated May 24 that Washington will remain neutral on the Spratly Islands issue.”(Philippine Mabuhay News: West Coast Edition, July 2013) http://bulatlat.com/main/2013/07/05/pathetic-wishful-thinking/#sthash.uWKpGOpT.HvqVpHYG.dpuf

We support the call of The Vienna Filipino Sector as it stages another rally at Stephansplatz, on the 13th of August 7:00pm "to dramatize our unending protest against the illegal intrusion of China into our territorial Waters."

No to China illegal intrusion in our territorial waters!

No to military exercises (war games) in Phlippines sea! 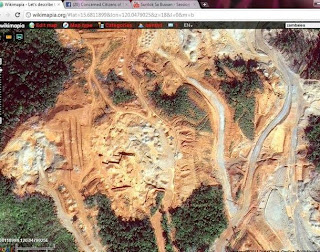 Heavy destruction from the invasion of 3 the illegal Chinese Giants in Sta Cruz, Zambales

It's not only Bajo de Masinloc (Panatag/Scarborough Shoal) that the Chinese have occupied. They also have grabbed a slice of mainland Zambales, 108 kilometers east. There Chinese miners rule, stealing nickel ore the same way they poach fish in the shoal. Bribed local officials abet them like modern-day Makapili collaborators.
In the West Philippine Sea-side Sta. Cruz municipality, Zambales, operate three Chinese conglomerates:
Through Filipino dummies they have set up five supposed "minahang bayan (small-scale mines)." The five load ore and unload equipment in one common pier, betraying the fact that they actually are one.

Republic Act 6082: "Section 1. There is hereby created in the Department of Justice a board which shall be designated and known as the Anti-Dummy Board and which shall be vested with and shall exercise the powers and duties hereinafter.

Anti dummy law protects the Philippines from unlawful use and exploitation having in its name or under its control, a right, franchise, privilege, property or business, the exercise or enjoyment of which is expressly reserved by the Constitution or the laws to citizens of the Philippines for at least at least 60% of the capital of which is owned by such citizens and maximum of 40% for a foreign investors but the Chinese mining firm paid the local people as dummy to virtually own the 60% while controlling 100% full real ownership.  Section 3. - Any corporation or association violating any of the provisions of this Act shall, upon proper court proceedings, be dissolved and offering rewards 25%  to the informer in Section 3-A. If dummy will come out they would have a chance to own 25% of these whole Chinese illegal investment and 75% would be turnover to the government.
The five machinate under cover of the People's Small-Scale Mining Act of 1991. Such wee mines are for subsistence quarrymen who use only brawn, mini-crushers, hand picks, and shovels. Anything but puny, the five Chinese fronts use sophisticated excavators, drills, crushers, and explosives. With the heavy ordnance, they level mountains for tens of thousands of tons of nickel ore a day. (A small-scale mine is limited to only 50,000 tons in its lifetime.)

Residents of Sta. Cruz cry that the Chinese mines have denuded the forest watersheds, and poisoned farmlands, rivers, sea, and air. Townsfolk of adjacent Masinloc, Zambales, and Infanta, Pangasinan, also suffer. Muddied coastal waters drive small fishermen farther out to sea. But in the vicinity of Bajo de Masinloc, Chinese warships shell them back to shore.

The Philippines is now China's main source of nickel. The five Chinese mines in Sta. Cruz contribute a sizeable portion. Although no exact figures can be obtained – small-scale mines operate under local government licenses, beyond the scope of the Mines & Geosciences Bureau – locals observe at the common wharf the departure of four ore-laden Chinese bulk carriers per week. China processes the nickel into hi-tech weapons and surveillance systems – to sabotage the Philippine military and economy into submission.

The Sta. Cruz-Masinloc-Infanta highway is called the "dump truck capital of the Philippines." Thousands of trucks' tailpipe emissions and ore-load dust pollute the air to alarming levels. Field monitors of the Department of Environment and Natural Resources reported on Nov. 15, 16, and 27, 2012, suspended particulates of 208, 727, and 824 micrograms per cubic meter, respectively, on the highway. Maximum tolerable is 90. 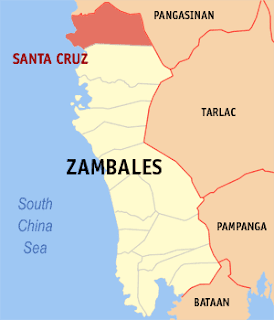 So in the barrios of Sta. Cruz, residents suffer acute respiratory infections – their top cause of morbidity. From 2001 to 2011, rural health workers noted an increasing incidence of 4,500 to 8,500 new cases per 100,000-population per year. Yet the Chinese mines have not improved local household incomes. (The entire mining industry has the highest poverty incidence.)

Health and environment ruin are accompanied by economic and political decay. By disguising as small-scale mines, the five Chinese thieves are able to skirt the stringent rules on the big ones. Provincial business permits can be obtained within days for as low as ₱10,000, and environmental clearances for ₱15,000, unlike the years-long wait for biggies to be scrutinized. Because virtually unregulated, the five Chinese mines pay no taxes, duties, fees, or royalties – for at least the sickened townsfolk's medical expenses. Provincial officials justify their localized exactions by pointing out that local governments do not get shares of central government revenues from big miners. (In 2011 the DENR reported that three million tons of Philippine mineral ores that were processed in China were unaccounted for by trade and Customs authorities.)

The mayors of Sta. Cruz, Masinloc, and Infanta profess to oppose the Chinese mines. That the latter continue to operate raises suspicion that the provincial capitols of Zambales and Pangasinan go over the mayors' heads and deal directly with pliant barangay officials. Either that or somebody's lying. The mayor of Infanta was murdered last December.

Bribery stories taint the Chinese mines. How they get away with their destructive ways is a mystery. The Wei-Wei Group entered Botolan, Zambales, in 2005 via a rushed approval during the Arroyo tenure. It came right after then-President Gloria Arroyo allowed China illegally to explore Philippine waters, under a secret, treasonous Joint Seismic Marine Understanding. Wei-Wei later barged into Sta. Cruz-Masinloc-Infanta.

The Jiangxi Group joined in partnership with a Nihao Minerals subsidiary. Officers of Nihao and affiliate Geograce Resources Inc. were involved in the illegal grant to ZTE International Corp. in 2005 of mining rights in the gold rush area of Mount Diwalwal, Compostela Valley in Mindanao Island.

Official Gazette of the Republic of the Philippines

Philippines, ASIA and the Global Economy

Posted by Filipina Nannies at 19:55

COUNTRIES. CITIES. FACTS WE NEED TO KNOW TO EMPOWER US